Fuzzing As Easy As Unit Testing

CI Fuzz CLI is an open-source solution that lets you run feedback-based fuzz tests from your command line. Every developer can use it to find bugs and vulnerabilities with three simple commands.

IMPORTANT: This project is under active development. Be aware that the behavior of the commands or the configuration can change.

cifuzz is a CLI tool that helps you to integrate and run fuzzing based tests into your project.

If you are new to the world of fuzzing, we recommend you to take a look at our Glossary.

You can get the latest release here or by running our install script:

If you are using Windows you can download the latest release and execute it.

By default, cifuzz gets installed in your home directory under cifuzz. You can customize the installation directory with ./cifuzz_installer -i /target/dir.

Do not forget to add the installation directory to your PATH.

Step 1: To initialize your project with cifuzz just execute cifuzz init in the root directory of your project. This will create a file named cifuzz.yaml containing the needed configuration and print out any necessary steps to setup your project.

Step 2: The next step is to create a fuzz test. Execute cifuzz create and follow the instructions given by the command. This will create a stub for your fuzz test, lets say it is called my_fuzz_test_1.cpp and tell you how to integrate it into your project. Usually you also have to add instructions in your CMakeLists.txt file to link the fuzz test with the software under test (e.g. use the target_link_libraries directive). The add_fuzz_test directive can be treated like add_executable.

Step 3: Edit my_fuzz_test_1.cpp so it actually calls the function you want to test with the input generated by the fuzzer. To learn more about writing fuzz tests you can take a look at our Tutorial or one of the example projects.

Once you executed a fuzz test, you can generate a coverage report which shows the line by line coverage of the fuzzed code:

See here for instructions on how to generate and visualize coverage reports right from your IDE.

Important: In general, there are two ways to run your fuzz test:

An actual fuzzing run by calling: cifuzz run my_fuzz_test_1. The fuzzer will rapidly generate new inputs and feed them into your fuzz test. Any input that covers new parts of the fuzzed project will be added to the generated corpus. cifuzz will run until a crash occurs and report detailed information about the finding.

As a regression test, by invoking it through your IDE/editor or by directly executing the replayer binary (see here on how to build that binary). This will use the replayer to apply existing input data from the seed corpus, which has to be stored in the directory <fuzz-test-name>_inputs beside your fuzz test. Note that this directory has to be created manually. In case a crash was found, the directory will be created, and the crashing input is added to this directory automatically. The fuzz test will stop immediately after applying all inputs or earlier if a regression occurs.

On Linux, cifuzz runs the fuzz tests in a sandbox by default, to avoid the fuzz test accidentally harming the system, for example by deleting files or killing processes. It uses Minijail for that.

If you experience problems when running fuzz tests via cifuzz and you don't expect your fuzz tests to do any harm to the system (or you're already running cifuzz in a container), you might want to disable the sandbox via the --use-sandbox=false flag or the use-sandbox: false config file setting.

Want to help improve cifuzz? Check out our contributing documentation. There you will find instructions for building the tool locally.

If you find an issue, please report it on the issue tracker.

Jochen Hilgers, one of the maintainers of CI Fuzz CLI, will hold a freely accessible live stream to demonstrate how CLI-integrated fuzz testing can be used to uncover bugs and vulnerabilities in C/C++.

In the stream, Jochen will demonstrate how to:

Live on Linkedin and Youtube on Oct 4th, 4 PM CEST. 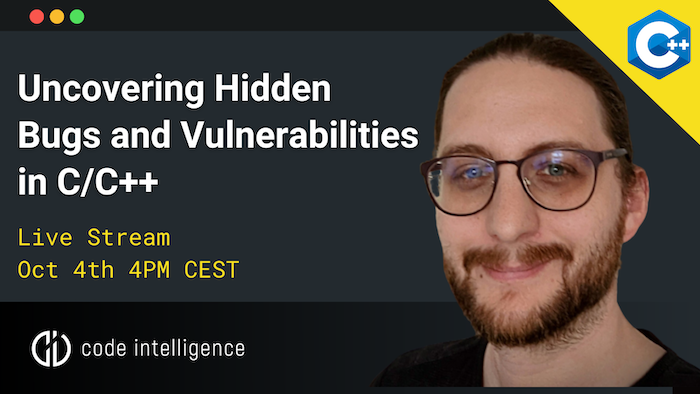 Sign up for a reminder on the day of the event.

"Thanks to Code Intelligence, our security testing became significantly more effective. All our developers are now able to fix business critical bugs early in the development process, without false-positives."